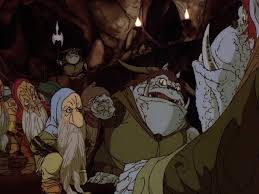 When my daughter Maitreya was four years old, I read her her first novel, The Hobbit.

She was doing pretty good with it! She followed along as she met Bilbo and Gandalf, and showed interest in the dwarves and thought Rivendell, Elrond and the rest of the elves were good too. But her fascination only really awoke when we had followed the party up into the Misty Mountains and watched Thorin and Co get abducted by goblins!

Oh no! As the dwarves were led down into the dark, netherworld of the mountains, driven forward by ruthless, whip-wielding goblins singing horrible songs, Maitreya turned to me, excited, and declared, “Goblins are cool!”

Then, when we woke up in the morning, Maitreya asked me to keep reading The Hobbit to her.

Well, that was easy. Maitreya made it to school rather late that day…

It was a rainy morning, and the wind and rain pattered against the window above her bed as I took up the story and we journeyed down into the realm of the goblins. Gandalf, that clever old wizard, of course came to their rescue but while making their escape, as you may recall, Balin (who was running along carrying Bilbo on his back) was ambushed by a goblin and he dropped the hobbit, who fell even deeper into the roots of the mountain into a dark abyss where, by a silent, still, subterranean lake, he met Gollum.

There, of course, they engaged in their famous riddling game.

Riddles are an ancient art, and besides being fun are great training in inductive, or inferential reasoning. If any of you know the pleasure that comes with cracking a tough riddle, where an unexpected flash of insight illuminates the inner meaning of the seemingly incoherent surface, you know what I mean!

That morning, I read through the ancient Anglo-Saxon inspired riddles to my daughter, and she listened with interest until I rasped out in Gollum’s voice this one:

Suddenly, this little voice piped up. “Time?” it asked.

I looked at Maitreya, shocked.”My god, you got it girl!” I declared, bursting into laughter!