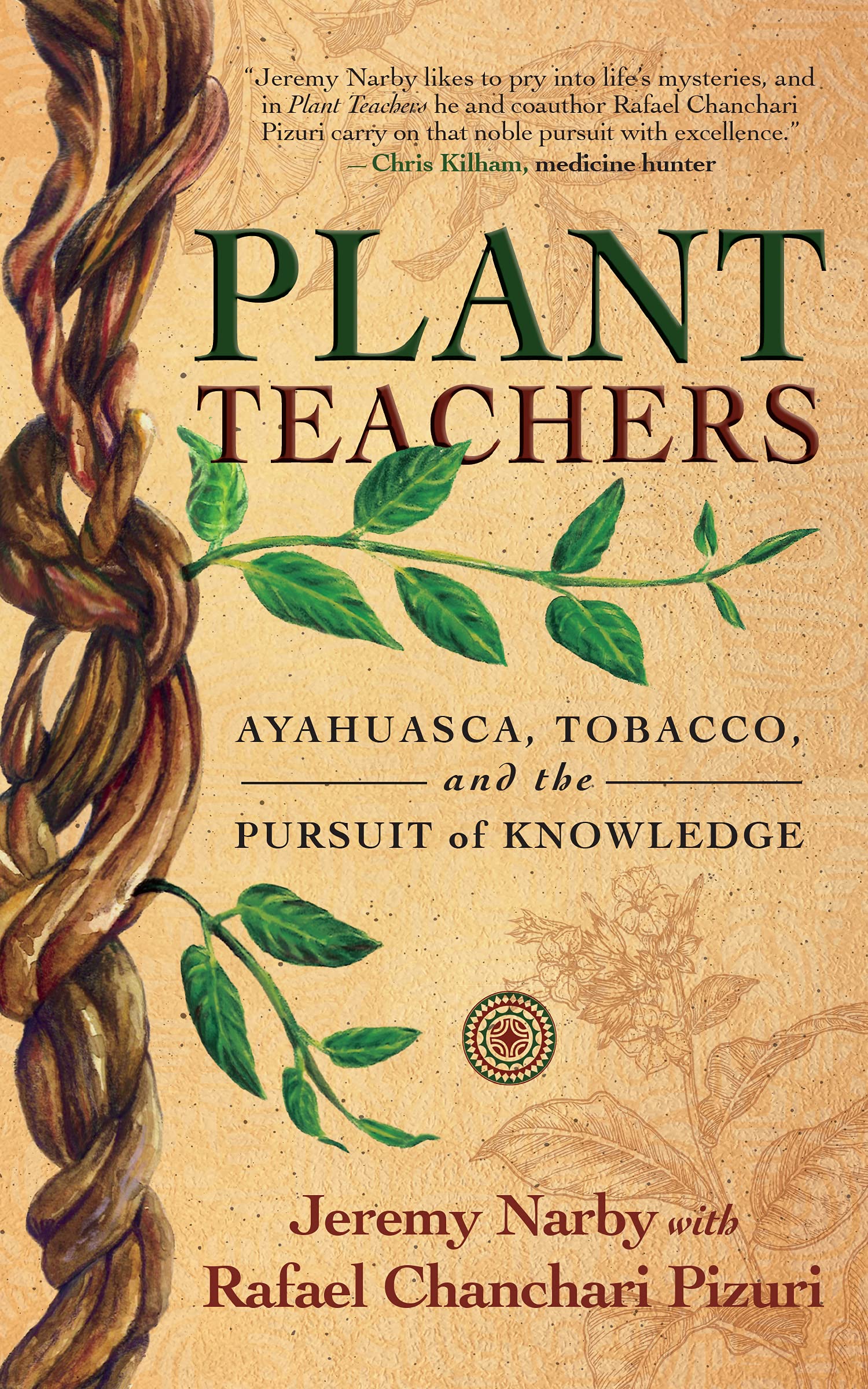 Jeremy Narby’s Plant Teachers: Ayahuasca, Tobacco, and the Pursuit of Knowledge is an elegant little tome (minus the endnotes it weighs in at 87 pages) that richly deserves a close reading and rereading. It’s a work you want to put on your bookshelf and keep there. For what it does is a rare commodity in the hyped-up world of the psychedelic goldrush: it slows down and listens.

And who would have imagined there is still so much to learn about tobacco and ayahuasca?

Narby’s work among the indigenous peoples of South America, particularly the Ashaninka, led to his initial exposure to the plant medicines of the Amazon. The result was the publication in 1998 of his pioneering book, The Cosmic Serpent, which offered some bold speculations about molecules and visionary experience. Since that initial salvo, Narby has published other work, but Plant Teachers, for sheer richness of content, may be his finest.

Why? For starters, Narby hews closely to the dictum of anthropologist Viveireos de Castro: “taking native thought seriously is to refuse to neutralize it.”

Narby’s book is evenly divided between his interviews with Rafael Chanchari Pizuri, an elder of the Shawi people and an inheritor of a long tradition of healing with tobacco and ayahuasca, and his exploration of the contemporary scientific understanding of tobacco and ayahuasca, especially their remarkable biochemical synergy with the human organism.

Chanchari, who speaks his native tongue and Spanish, consults the internet, and understands and speaks the language of molecules, opens with a statement one hears over and over again among indigenous and mestizo shamans: “Tobacco has a soul, it has a spirit, which is of two sorts, medicine and malice [maldad], or what we call in Spanish sorcery [brujería]. It has two spirits… All the plants that have power – in other words, the teacher plants: ayahuasca, tobacco, toé, catahua, chambira palm – have two spirits or two souls. So the person who works with these plants must choose to learn medicine or malice.”

As Narby points out, whether we choose to hold such statements as metaphors (or superstitions) or inquire into them more deeply by learning a multi-cultural perspective, there is a fundamental point here. As with the ancient Greek word pharmakon, which describes both remedy and poison, Amazonian medicine walks a similar razor’s edge.

Indeed, the flattening effect of “neutralizing” native thought may have led to a certain naivete in the West’s enthusiastic adoption of ayahuasca, for whom all ayahuasca vines are created equal and are of one species. Not so, according to Chanchari, who distinguishes among many varieties of ayahuasca: “sky, thunder, mariri [“magical phlegm”], lightening… broadly speaking, there is black and yellow ayahuasca… Yellow ayahuasca is called ‘sky’ [cielo]. ‘Cielo ayahuasca’ is for medicine, for vision. That’s what I drink, and in my garden I only plant sky, and not the other varieties, which teach malice and sorcery and all that.”

Hmmmmm. What kind of ayahuasca will you be drinking in ceremony this weekend? What kind of additives are in it (it turns out neo-shamans add significantly more DMT to their brews to guarantee a bigger kick)? And by the way, how are you relating with the tobacco in your life?

According to Narby, another common ground shared now emerging between Western science and Indigenous wisdom is awareness of the healing capacity of the ayahuasca vine itself, which previous DMT-centered explanations of the brew tended to treat as a delivery vehicle and little more.

Yet it turns out that the harmala alkaloids contained in the ayahuasca vine have significant health enhancing properties. “All three harmala alkaloids induce the formation of new neurons; harmine, in particular, also has anti-inflammatory, analgesic, antimicrobial, antioxidative, antiaddictive, antidepressive, and possibly anti-Parkinson’s and antitumor properties.”

This is in keeping with the reports of indigenous peoples that additives such as chacruna, which provide the so-called “active principle” of DMT to the brew, are mainly for the benefit of beginners: experienced practitioners don’t require the added illumination to see the visions induced by and experience the health benefits of the vine alone!

This is deeply encouraging. There has long been an imbalance between the Western psychonaut’s thirst for visionary experience and the indigenous focus upon prayer and healing – even as we consumed the same plant medicines and even sat side-by-side in the same tipi or maloca.

Narby’s work shows us the way forward, a way to open to “the validity of indigenous knowledge as a second way of knowing and a compliment to science… I think the key to integrating two different ways of knowing is to go back and forth between the two often enough and over a long period of time. Practice makes perfect.”

As T.H. White’s Merlin once said to young Arthur, “There is only one thing for it then — to learn. Learn why the world wags and what wags it. Learning is the only thing for you. Look what a lot of things there are to learn.”

Plant Teachers is written in that kind of spirit. Look how much remains to be learned about our plant allies tobacco and ayahuasca!

This review originally appeared as “Tobacco, Like Ayahuasca, Is a Shamanic Teacher Plant” in the webzine Lucid News: