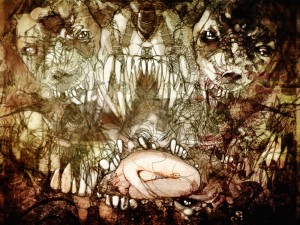 The loss of the daughter to mother, the mother to the daughter, is the essential female tragedy. It was expressed in the religious mystery of Eleusis, which constituted the spiritual foundation of Greek life for two thousand years…

The separation of Demeter and Kore is an unwilling one; it is neither a question of the daughter’s rebellion against the mother, nor the mother’s rejection of the daughter… Each daughter, even in the millennia before Christ, must have longed for a mother whose love for her and whose power were so great as to undo rape and bring her back from death. And every mother must have longed for the power of Demeter, the efficacy of her anger, the reconciliation with her lost self.
Adrienne Rich, Of Woman Born

One definition of “myth” might be: “A once sacred narrative which has lost its original context.” Like the flotsam and jetsam of a shipwreck on the high seas, we encounter fragments of myth, such as in Hesiod’s Theogony, drifting about detached from their original cultural setting and so read them as curious stories, quaint remnants, or illogical accounts of the cosmos.

What is lost in such fragments is the original wholeness of mythos, symbol, and ritual within which the myth had its transformative power. END_OF_DOCUMENT_TOKEN_TO_BE_REPLACED

The winding path that led to this essay, just published in Arion: A Journal of Humanities and the Classics, began with the traditional lore of an Ashaninkan shaman working in the Peruvian Amazon. It may be the first significant discussion of Homer’s Odyssey in the light of contemporary knowledge of sacred plant medicines, indigenous ways of knowledge, and shamanic practices to appear in decades.

Towards the end of our year long investigation into the healing practices of the vegetalistas, as the indigenous and mestizo practitioners of rainforest medicine are known, we engaged in a plant dieta under the direction of one of the informants in Susana’s dissertation research, the curandero Juan Flores. One day, Flores tramped back to visit us during our solitary fast, and there the conversation turned to the mythic—and quite real according to him—beings that inhabit the Amazonian waterways. As Flores described the behavior of these sirenas, Robert was struck by the intriguing parallels between their seductive behavior and that of the Sirens described by Homer. Flores had never heard of the Odyssey, yet when given the story of Odysseus’ ordeal in the orbit of their rapturous song, Flores nodded his head and said grimly, “That’s them, alright.”

It was then we began to suspect that the indigenous experience of the natural world, which has a marked universality among native peoples, might have an underlying, shaping influence upon Homer’s narrative.

Along with familiarizing us with the cosmovision of the Amazonian peoples, our fieldwork also introduced us to the practice of shamanic journeying, which among Amazonian peoples, who live in an environment of extraordinary biodiversity, is often conducted in ceremonies utilizing ayahuasca, a psychoactive plant medicine whose name translates from Quechua as “vine of the spirits” or “vine of the dead.”

There we were also struck by certain parallels between Odysseus’ visionary descent into Hades and ethnographies of traditional shamanic practices among indigenous peoples worldwide, especially when supplemented by cognitive archaeologist David Lewis-Williams’ theory of the intensified trajectory of consciousness. These parallels are suggestive of a deeper morphological relationship between Homer’s narrative and the traditions of vision quest among the ancient, indigenous Mediterranean peoples (whose material culture is preserved in the Paleolithic cave sanctuaries), than is generally recognized. By viewing, as our main objective, just one episode in the Odyssey, the hero’s visionary journey in Hades, from an ethnographic perspective, this essay hopes to open up more inquiry into the indigenous, and shamanic, background of the epic poem.

To read the entire article, please enter here: The Intensified Trajectory of Consciousness in Odysseus’ Vision in Hades