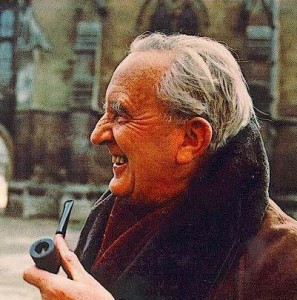 Although Middle Earth could easily be characterized as a product of the intensified trajectory, J. R. R. Tolkien, staunch Catholic, Oxford don, one of the most brilliant philologists of his age, gives scant evidence of a shaman adventurer. “I am in fact a hobbit,”1 he once wrote, describing his conservative and simple tastes.

(Since the webzine Reality Sandwich just ran this excerpt from our The Shamanic Odyssey: Homer, Tolkien, and the Visionary Experience, we’d like to share this contemplation on the shamanic character of Tolkien’s mythopoeic vision here as well.)

Like Bilbo, he preferred to hear the singing of his kettle as he puttered around in his garden, leading his biographer, Humphrey Carpenter, to ask:

Should we not wonder at the fact that a mind of such brilliance and imagination should be happy to be contained in the petty routine of academic and domestic life; that a man whose soul longed for the sound of waves breaking against the Cornish coast should be content to talk to old ladies in the lounge of a middle-class watering-place; that a poet in whom joy leapt up at the sight and smell of logs crackling in the grate of a country inn should be willing to sit in front of his own hearth warmed by an electric fire with simulated glowing coal?2

Yet it is precisely because Tolkien was a visionary that he was content to lead a life that to some, like poet W. H. Auden, appeared so appallingly staid. For Tolkien, Numenor was as real as, if not more real than, Oxford town. Although he himself may have disguised and felt ambivalent about that, psychologically Middle Earth existed as a literal place that he journeyed to. Whenever Tolkien found an unresolved mystery in the etymology of his Elvish languages or the history of the various races that populated his mythos, he would state, “I must find out” the answer, as would any intrepid empiricist seeking objective data in this world.

What is certain is that Tolkien’s quest, often couched in the language of his discipline of philology, was to retrace the route of the development of modern consciousness back to that primal mind, “alive with mythological beings,” which he termed Faery. Given the obviously visionary component of Tolkien’s work, it is odd that more attention hasn’t been given to this aspect of its nature. END_OF_DOCUMENT_TOKEN_TO_BE_REPLACED 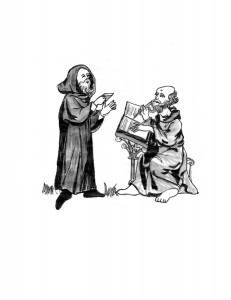 J.P. Harpignies, New York-based Associate Producer of the Bioneers Conference, and editor of Visionary Plant Consciousness recently corresponded with Robert Tindall, now located in the cacophonous mestizo wilds of the Peruvian Amazon, about his new book, The Shamanic Odyssey: Homer, Tolkien, and the Visionary Experience.

J.P.: Robert, can you explain the genesis of this book?

R.T.: The Shamanic Odyssey can be mainly traced back to a conversation Susana and I had with our teacher of the vegetalista shamanism of the Amazon, the Ashanincan curandero Juan Flores. It happened when we were engaged in a very traditional diet deep in the rainforest, where Susana and I were living in isolation drinking shamanic plants and subsisting primarily on roast green bananas! Flores had tramped back to visit us, and sitting together by the stream there, the conversation turned to the mythic – and quite real according to him – beings that inhabit the Amazonian waterways. As Flores described the behavior of these sirenas, I was suddenly struck by the deep parallels between their seductive behavior and that of the Sirens described by Homer. Flores had never heard of the Odyssey, yet when I described the story of Odysseus’ ordeal in the orbit of their rapturous song, Flores nodded his head and said grimly, “That’s them, alright.”

I had already been observing a number of intriguing parallels between the ancient mythology of the Greeks and Celts I had studied at the university and the contemporary cosmovision of peoples in the rainforest, but this conversation stuck with me.

Upon our return to the United States after our year-long immersion in the vegetalista tradition, I had a chance to spend some time teaching the Odyssey, and it was then I began to recognize that the text is shot through with indigenous and shamanic cultural elements: shapeshifting, visionary journeys, plants with resident divinities, masters and mistresses of animals, the symbiosis between plant/spirit/shaman, animal becoming, sacred topography—the list went on and on. The case became particularly intriguing when Susana and I began analyzing the descriptions of the therapeutic effects of bardic song in the Odyssey in the light of her research into the healing powers of Amazonian healing songs, i.e. icaros.

The Odyssey led me into an unfolding meditation on the indigenous mind at the root of the Western tradition. The more I followed up on details of the epic poem, the more terrain was revealed. Most notably this occurred around the mythologem of the clash of the Cyclops and Odysseus, which I see as a remnant of a very ancient oral tradition transposed into Homer’s comparatively modern narrative. As a teaching story, like the Genesis account of the Garden of Eden, it appears to me to capture modern humanity’s break with indigenous, or primal, consciousness.

Just as I was contemplating the ramifications of such a mythologem existing in the Odyssey at all, I encountered the peyote shaman Bob Boyll, the second major cultural informant for our book, and heard his account of the two roads of humanity he had been taught by the Hopi prophet David Monongue.

Again, like the uncanny parallels between the Amazonian and ancient Greek sirenas, Monongue’s description of the two roads of humanity struck me as too similar to the cultural tensions illustrated in the clash between the proto-modern Odysseus and the indigenous Cyclops to be accidental.

To tell you the truth, I often felt like an amanuensis, those folks who during medieval times assiduously transcribed the oral tradition, during the writing of this book. In that sense, its genesis lies in converging lineages of plant-based shamanism, the research into icaros of my co-author Susana, ancient texts, ethnography, the work of anthropologists like Reichel-Dolmatoff, even the mythopoeic work of J.R.R. Tolkien. END_OF_DOCUMENT_TOKEN_TO_BE_REPLACED