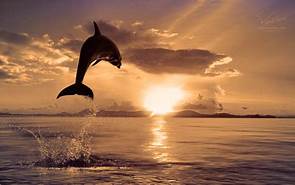 Elizabeth Gilbert isn’t the only artist or scientist to believe it was a “huge error” when the Renaissance came and “put the individual human being at the center of the universe above all gods and mysteries,” leaving a barren landscape with “no more room for mystical creatures” behind it.

It turns out, if we just look around, we find that we are sharing the planet with numerous species that can justly be described as “mystical,” as belonging to an order of being that we fantasize of encountering on distant planets in the depths of outer space — yet we are simply too human-centered to recognize it! As primatologist Frans de Waal recently asked, “Are we smart enough to know how smart animals are?”

The verdict appears to be “just barely,” and we’ve only begun to scrape the surface of the intelligence of the cosmos.

Because dolphins strike so close to our home as a species, yet so far exceed our capacities – and arguably revel in a rich, profound consciousness of their own existence just as we do – I am quoting extensively from a recent work, Voices of the Ocean, by science writer Susan Casey, by way of proving Gilbert’s point that putting human beings at the center of the cosmos is not only bad science, but it impoverishes our sense of the wonder of existence. Here are my excerpts from Casey’s book:

“At the risk of falling down the rabbit hole –a place you can easily go with dolphins, I would soon learn – my most enduring impression was how otherworldly the animals were. As they swam by me, they seemed to exist in a more hazily defined realm than our own hard-edged terrestrial one. They inhabited what ancient Oceanic peoples called “the Dreamtime,” a gauzy, blissful place located somewhere between our generally-agreed-upon reality and any number of sublime alternative states.

Certainly, dolphins have a laundry list of capabilities that qualify as magical. They can see with their hearing, deploying biological sonar to effectively produce X-ray vision: dolphins can literally see through objects. They know when another dolphin – or human being – is pregnant or sick or injured. Their echolocation skills far outmatch the most sophisticated nuclear submarines; scientists suspect they can even use them to determine another creature’s emotional state. They can communicate at frequencies nearly an order of magnitude higher than anything humans can discern, and navigate electrical and magnetic fields imperceptible to us. They can stay awake and alert for fifteen days straight.

Recently, scientists have marveled at dolphins’ healing abilities, which include infection-resistant, pain-free, hemorrhage-proof rebounds from even the deepest wounds… Researcher Michael Zasloff, MD, described the process as mysterious and miraculous, likening it more to regeneration than repair. “Despite having sustained massive tissue injury, within a month the animal will regain its normal body contour… A chunk of tissue maybe the size of a football will have been restored with essentially no deformity.” He also surmised that dolphin tissues might contain “the long-sought natural morphine that we’ve been looking for.”

The dolphins’ evolutionary path is itself a preposterous feat: their predecessors were land mammals that resembled small, hooved wolves. After an interlude in swamps and coastal lowlands, these fledgling aquanauts moved permanently into the water. Over the course of twenty million years, their limbs turned into fins, their shape became streamlined for swimming, their fur turned to blubber, their nostrils migrated to the top of their heads – in other words, they developed all the equipment needed to master undersea life. They aced it, too: dolphins have perfectly hydrodynamic bodies. They swim faster than physics would seem to allow, given the density of water and the amount of muscle they have. Their bodies are so ideally adapted for speed, navigation, plunging into depths, and keeping warm that it’s hard to imagine improvements.

We’ve long known that dolphin brains are impressive, bigger even than the brains we consider the gold standard: our own. Yet science still searches for answers to what the dolphins are doing with such metabolically expensive machinery (and for that matter, what human brains are really up to). No creature would cart around a big brain if this heavy artillery wasn’t in some way essential for its survival. A clue emerged when dolphin brains, like humans’, were found to contain von Economo neurons: specialized cells that relate to higher notions like empathy, intuition, communication, and self-awareness. Interestingly, dolphins have far more of these neurons than we do, and they are thought to have developed them 30 million years ago, about 29.8 million years before Homo sapiens swung their first clubs.

The dolphin genome, sequenced in 2011, bears a striking resemblance to our own. When researchers compared the dolphins’ gene mutations to those of other animals, they found 228 instances where the dolphins had done something smarter, evolving in ways that revved up their brains and nervous systems. These adaptations aligned them more with humans than with any of the other species tested, even those which were more closely related to dolphins. Having been around for so much longer than we have, dolphins had also developed some nifty tricks: one of their responses to type 2 diabetes, for instance, is to internally flip a biochemical off-switch and block the disease’s progression.”

Both this profound and mysterious kinship with humans and the remarkable power of the dolphins’ to discern a world that our senses are not yet sharp enough to perceive was demonstrated to biologist Maddalena Bearzi one day when she was tailing a pod of wild bottlenose dolphins along the coast of Los Angeles. Here’s the report:

“The animals were hunting, ignoring her research boat as they searched for fish. Finally, they found a huge school of sardines and began herding them. If there’s anything that commands a dolphin’s attention it is a mother lode of fish, so Bearzi was surprised when one of the dolphins suddenly broke away from feeding and headed out to sea, swimming at top speed. The rest of the pod followed; so did Bearzi and her crew. The dolphins arrowed about three miles offshore and then they stopped, arranging themselves in a circle. In the center, the scientists were shocked to see a girl’s body floating. She was a teenager and barely alive, her suicide attempt only moments away from succeeding. Around her neck, the girl had strung a plastic bag containing her identification and a farewell letter. Thanks to the dolphins, she was rescued. ‘I still think and dream about that cold day,’ Bearzi wrote, ‘and that tiny, pale girl lost in the ocean and found again for some inexplicable reason, by us, by the dolphins.’”

As the Irish poet and mythopoeic genius W.B. Yeats put it, “The world is full of magic things, patiently waiting for our senses to grow sharper.”