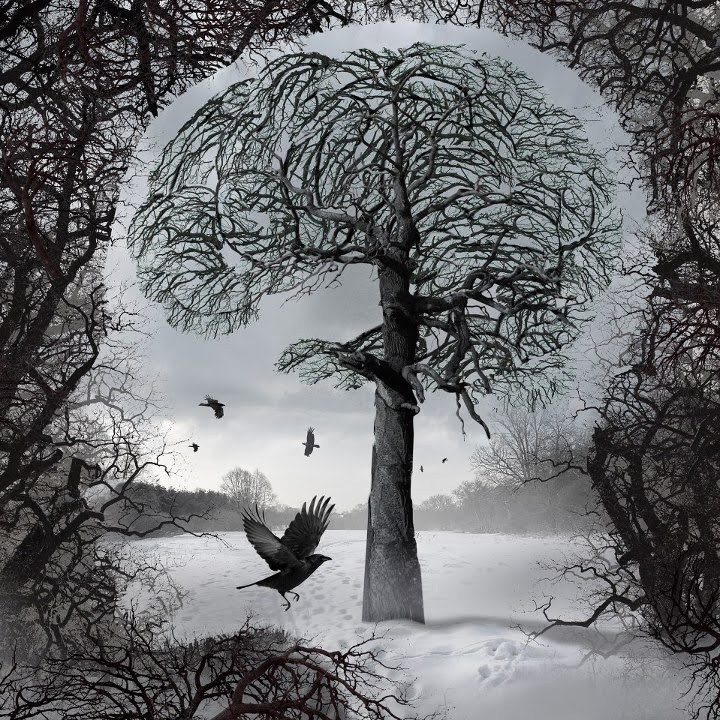 I am putting the final touches on my fantasy novel, “The White Snake: The Raven and The Servant,” which retells an old Brothers Grimm fairytale with a lot of shamanic twists and turns, as well as some old fashioned literary fun, such as this old horse’s account of how General Relativity theory helps explain a raven’s supernatural abilities!

Arriving at the swinging double doors, Caedmon laid his hand upon the latch and then paused. Once again, a low mumbling emerged from within. The horses were in conference. Placing his ear to the crack, Caedmon listened.

“Nooooo,” that familiar low, rich voice intoned, “it wasn’t his father nor grandfather that served the previous kings. It was that white tufted rascal himself.”

“Honestly, I had no idea ravens were so long lived,” said the same younger voice, clearly dubious.

“They aren’t,” the rich voice responded. “They have normal lifespans just like the rest of us. No extraordinary longevity – if you clip their wings, that is. Or if they are the stay-at-home type.”

“So how do you explain this paradox. How can a raven of a normal life span serve three kings?”

“Well, it has to do with their unusual gift, of course. You are not aware of it?”

“All horses know they can fly between worlds, even into the land of the dead. So what?”

“It has to do with how they live in time, or perhaps I should say spacetime. A raven’s perspective of our world is like a stone’s perspective of the surface of the pond it is sent skipping over. It is true, they have not yet learned how to travel into the past, seek that wormhole as they may, but…”

“It is a symbol!” cried out that old, shrill voice. “A symbol of Ragnarök and the ending of the world!”

“Skalla,” the deeper voice intoned drily, “can you please restrain your outbursts?”

“You aren’t saying they time travel?” the younger voice scoffed.

“No. Perhaps it would be more accurate to say they time bend. A raven’s leap between worlds involves the crossing of event horizons, a punching through from one gravitational realm to another. A raven running an interdimensional errand, or just on a pleasure jaunt, doesn’t experience any alteration of its time as it approaches the frontier between realms, but from our perspective everything about it goes into slow motion, depending, of course, on the mass of the black hole it is approaching.”

To Caedmon’s surprise, the deep voice quavered with excitement.

“Now, if we could see the moment just before the raven vanishes over the horizon between one world and another, it would appear frozen in time. Not a heartbeat or flutter of wings! Yet its own experience of time would be completely normal. Of course, we can’t see that penultimate moment because we would then be experiencing an infinite future…”

“Oh, come on now!” cried out the younger voice. “What possible proof could you offer for this wild fabric of speculations?”

“Well, that’s easily done,” the older voice chuckled. “That white-tufted raven was sent on an expedition into the realm of the dead by good King Diarmuid’s father when the boy was just a princeling. When the raven returned bearing its response, Diarmuid was king and his father dead and buried. The raven had, according to its own report, only been flying for a week – though I suspect he stretched the truth a little and had made a couple of side jaunts.”

Caedmon, like the rest of the congregation, stood amazed, absorbing this revelation.

“That raven is no older than me, and nowhere as wise. He may from our perspective enjoy a supernatural longevity,” concluded the deep voice, “but in fact he is more like a mischievous teenager who never had to grow up, he’s been larking about through spacetime so much.”

At that, Caedmon remembered the King was awaiting him. He rattled the latch and swung open the door. The horses all looked up at him as before, their minds set only upon their feed and exercise. Nodding respectfully, he approached Troels’ stall, who stood gazing out as if Caedmon were expected.

One Reply to “The Horse Explains A Raven’s Unusual Longevity”