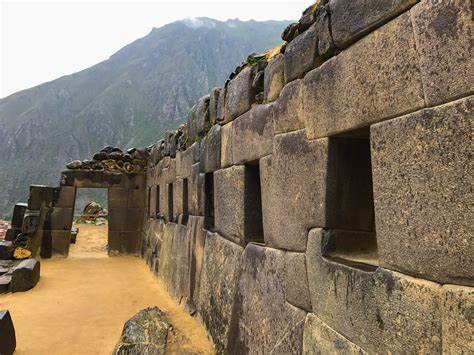 As I gradually accustomed myself to seeing through the worldview of the pre-Colombian high cultures of the Andes, I began to perceive features in archaeological sites that I previously hadn’t been able to see at all. At Ollantaytambo, for example, after ascending to the Sun Temple I found that the features of the severely defaced jaguars carved upon the Wall of the Six Monoliths were far clearer, lying just beneath the scars left by Spanish vandals.

This sudden seeing of what has long lain in plain sight is hardly a new experience.

Europeans knew about the Paleolithic temple caves for centuries before recognizing their actual time depth and inestimable cultural worth. Yet saddled with a worldview that disallowed the existence of human culture before 4004 BCE (that is, the date of Bishop Ussher’s calculation for the creation of the world), visitors to the caves simply could not perceive the vast antiquity of the iconography from 25,000 years before. The graffiti they scrawled upon the walls testifies to this. It wasn’t until European science had tentatively begun to establish the hoary time depths of the geological processes of the Earth that the possibility of evolution, fossil records, and human culture of anything other than superficial depth could be perceived.

Yet, the revelation of the deep past is a cat and mouse game, our unseen inheritance a plaything in the hands of the industrial forces unleashed upon Peru.

This fact was driven home to me some time after my return from the ancient temple complex of Chavín when, in the darkness of the wee hours of the morning, I walked out of Takiwasi after an ayahuasca ceremony.

The jungle roads were utterly silent, the stars gleamed down, and I needed to get back to my home a couple of miles away across the Shilcayo river in the section of town called La Banda. The road passed through Tarapoto’s version of a red-light district (comprised of a couple of wooden shacks by the bridge) and I had been advised not to attempt the passage at night. I therefore called a friend of mine who drove a motocar and requested he come to pick me up. Restless, I had set off down the road beneath the palm trees in the direction I knew he would be approaching from when a voice said to me, “Slow down and pay attention!”

Arrested in my movement, I halted and looked. Across the road was a boulder, one that I and the other workers at Takiwasi passed by every day and which had never excited comment, yet this evening it seemed to fairly shout out at me. As I walked towards it across the road, I was electrified to see the faintest, yet perfectly discernable, lineaments of a jaguar head. I stood before it musing when my local mestizo friend pulled up, a Tarapotino who had never drunk ayahuasca in his life. I asked him, “Do you see a jaguar head in this stone?” and pointed to the rock.

“Yup,” he said, nodding his head, conviction written all over his features.

I lay up until the early morning, turning over and over the implications of my “discovery” – should it turn out to be something other than an insubstantial pageant faded by the morning. Archaeological remains are few in the San Martin region of Peru, and there is no evidence for or memory of megalithic cultures that carved in stone, not in that region of the high Amazon. Was it reliably, physically real with a historical “aura,” or had I seen a spirit, a protector of the grounds of Takiwasi?

The next day, I avoided the stone. I wanted to digest the experience and was, moreover, afraid that when I approached it again my vision would turn out to be a “hallucination.” After all, a couple of days wouldn’t matter if the stone had sat there for centuries.

I was wrong. A couple of days later I could not find the stone in its usual setting. My pulse quickening, I cast about and spotted it turned upside down in a ditch, all vestiges of the jaguar head vanished from sight. A vehicle, no doubt a huge truck, had dislodged it from its position.

Whatever glimpse I may have been given of an unknown pre-Colombian people had dissolved, leaving not a rack behind.