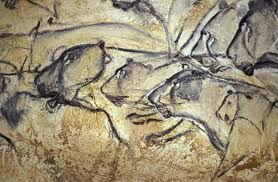 Fluidity means the categories that we have, man, woman, horse, tree, etc., can shift. A tree may speak. A man can get transformed into an animal and the other way around, given certain circumstances. The concept of permeability is that there are no barriers, so to speak, between the world where we are and the world of spirits. A shaman, for example, can send his or her spirit to the world of the supernatural or can receive the visit of supernatural spirits. When you put those two concepts together, you realize how different life must have been for those people from the way we live now.

If one gazes into the paintings of the lions in Chauvet cave long enough, one realizes they are not, in fact, paintings. They are the lions themselves, or rather, the imprint of the animal spirit upon human consciousness. With no separation between the artist and his subject, even gazing upon the images through the medium of photographs provides a glimpse into the mind of the paleolithic artist/shamans. In fact, the living quality of the images, the sense of being surrounded by spirits such as Odysseus encounters in Hades, is reported by the scientists and others who visit Chauvet cave. Herzog stated it was a positive relief to return to the surface after longer sessions of filming.

Perhaps the most beautiful expression of the Dreamtime quality of the caves, where the fiction of the temporal separation of events in time melts away and simultaneity in spirit reveals itself, are the footprints found in the depths of Chauvet cave of a wolf and a boy, standing next to one another. The scientists who study the cave do not know if the wolf was walking with the boy, if the wolf was stalking the boy (or vice versa), or even if the footprints are from the same moment in time or separated by thousands of years. And yet, from the indigenous perspective, like the cave paintings, the footprints themselves are direct imprints of the realm of spirit.

Human and animal walk together in the eternity of Dreamtime. 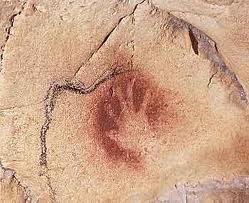 2 Replies to “On Paleolithic Dreamtime”