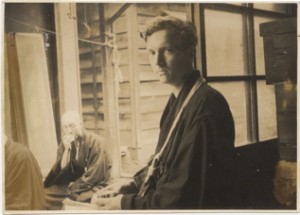 I showed up at Koko An Zendo while still a teenager. Having done my preliminary research, I marched into my first dokusan with Robert Aitken and announced my intention to take up the path of Zen. He had regarded me and said, “Well, there is this koan called Mu…” Shortly thereafter, I moved into that little temple in Hawai’i and embraced the deep sense of inner vocation I felt upon chanting the vows and taking my seat for meditation.

I was a rough piece of work. Unruly, my peace of mind shattered by my life on the streets, without inner direction except a fierce conviction that the Buddha Way was mine own. I don’t know what Aitken Roshi saw when he accepted me as a student – he was an intensely private being. Yet I recently came across a passage in a little booklet he published in 1960 which seemed to reach out of across the decades to clarify his mind for me:

Sometimes a juvenile delinquent is brought to the temple by despairing parents in hopes the monks can make a man of him. In the one case of this kind I know about the boy had a difficult time in adjusting to temple life. He made one entire sesshin a complete washout for everyone by going into giggling fits in the zendo. However, I found him at the same temple when I visited there six years later. He had become a monk and was acting as the personal attendant of the roshi. So far as I could tell, the temple life had indeed straightened him out.

Had Aitken Roshi recalled that “juvenile delinquent” as I had audibly and visibly battled with my inner demons through my second sesshin, wreaking similar havoc on the atmosphere of the zendo? Had that long ago encounter shored up his determination to keep a loose cannon like me rolling around the temple until I could batten myself down? I suspect so.

The years flowed by. Sesshin followed sesshin like dreams. My practice emigrated to Ring of Bone, and those sweet, harsh dreams became imbued with the California sunshine, the creak of wood, soughing pines, and the freedom of the meadow. Each feature of the landscape became etched in my mind, the sangha familiar and strange as family always is.

And then, I disappeared into the Amazon rainforest for years. Our daughter, Maitreya, came. My career as a professional academic got launched. My Zen training, but not my vows, receded in importance. Nostalgic memories of ROBZ would arise as I led zazen and the chanting of the Enmei Jikku Kannon Gyo in preparation for an ayahuasca ceremony at Takiwasi, a center for the treatment of addiction in the Peruvian Amazon, but I was truly on my own. No one reached out with the birth of my child, and when my family needed protection and nourishment (and man, at times we did!) we relied on the way of prayer of the Native American Church.

I had dropped off the map – but not out of the terrain. We were called to purchase land in Mendocino from a student of Nakagawa Soen Roshi, who passed on to us the stewardship of a thriving zendo upon her land. But it was stumbling across a black and white photo of Aitken, taken in 1956 in Japan, that confirmed my desire to return to my practice at ROBZ.

The photo was a revelation. There, written plain upon Aitken’s youthful face at Ryutakuji, where he sits in monk’s robes, perhaps during a break in sesshin, was the noble spirit that was to set me on my path thirty years later. In the midst of his physical suffering and who knows what inner battles, his essential nature was laid bare. Resolute. Beautiful. A hero. The guy who saved my life. The lineage that saved my life.

I wept. I wept again. And again. The image was on the desktop of my computer. Now it is printed out and framed on my altar. Thank you, Robert Aitken. I love you, man.

As the car turned up that old dirt road to the zendo last August, it seemed as if every tree, every branch, was precisely as I recalled it. Approaching the zendo, feeling the familiar creak of its boards beneath my feet, hearing those old voices again, it didn’t feel like I was coming home. It felt like Mara was at work, throwing up an illusion of stability and timelessness. Things were not the same, not by a long shot, but the lure was there to slip into the old rhythms, to reenter the stream.

It’s a trope, I suppose, that we are emigrants through life, that the world is a wilderness. It’s a good trope, though.

It was good to wander the mountains and rivers with the sangha again.

One Reply to “Reflections on A Dawn Cloud”