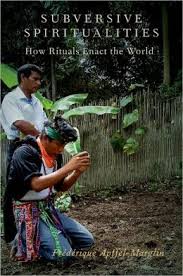 It is a rare occurrence to encounter an anthropological work that is intellectually rigorous and deeply spiritual, one which both illuminates the mind and touches the deep concerns of the heart. Yet when such a miracle occurs, as we find in Frédérique Apffel-Marglin’s Subversive Spiritualities: How Rituals Enact the World, all too often these works languish in obscurity. The ethnographic works of Gerardo Reichel-Dolmatoff on the Tukano Indians, for example, still make for riveting reading, yet his volumes mainly gather dust upon university library bookshelves.

After her upbringing in Morocco and her anthropological studies at Brandeis University, Apffel-Marglin began her first fieldwork in the 1980’s in the temple city of Puri, India. Her experiences there opened her eyes to the power of ritual as a regenerative practice, transforming “a secular Western anthropologist into a person with a very different relationship to rituals and to the beings that were invoked and conversed with during their enactment.” As her engagement with ritual deepened over the years, leading her to Peru and extensive fieldwork among Andean and Amazonian peoples, her critique of conventional anthropology, with its view of rituals as mere “symbolic action” and the dismal inverse proportion between anthropological archives and the well being of the worlds these archives represent, sharpened. Eventually she founded Sachamama Center, a non-profit organization in the Peruvian High Amazon which collaborates with the local, indigenous population on bio-cultural regeneration projects. Most especially, Sachamama works to reintroduce the yana allpa (more widely known as terra preta), a remarkably fertile pre-Colombian soil recently discovered throughout the Amazon, back into the native communities from which it originated.

Subversive Spiritualities is the fruit of her many years of anthropological fieldwork and meditations upon the “cosmocentric economy” of indigenous peoples and, in contrast, the “Modern Constitution” of the West. In the book Apffel-Marglin weaves a fugue, a counterpoint of two themes.

In the first theme, she depicts the richness and efficacy of native practices through first-hand descriptions of the Andean water ritual of Yarqa Aspiy and the agricultural Festival of the Ispallas, as well as native reactions to the forced imposition of the Modern Constitution, as in the well-intentioned Fair Trade movement of Peru or the family planning programs of the Bolivian government. Along the way, she even manages to make contributions to our understanding of native medicine, and the use of ayahuasca.

In the second theme, Apffel-Marglin conducts the most comprehensive, deeply informed critique of the foundations of Modernity (laboring under its unwieldy, artificially constructed divisions between observing, alienated self and absolute Space, Time, and Nature) that I have yet to read. In a narrative that reads like good detective fiction, Apffel-Marglin discloses the all-too-human historical and political forces, such as the enclosure movement, witch hunts, and bloody religious wars, which were an integral part of the emergence of modern science in Europe. In so doing, she deftly unveils the little carnival showmen, such as Descartes, Boyle, and Bacon, fiddling their epistemological dials behind the big, booming smokescreen of Oz the Great and Modern.

For example, surveying contemporary Western society, it is hard to dispute her claim that, “With Descartes’ cogito, the mind departed from matter, transmuting the body and the world into soulless mechanisms, transforming us into the only observers of an inert material reality, alone amongst ourselves, abandoned by all the other beings of the world.” Apffel-Marglin’s juxtapositions of aspects of indigenous culture with those of the history of the Scientific Revolution, such as Boyle’s famous experimental method for establishing certainty, is deft. In showing how Boyle’s method “created new boundaries between the physical, the metaphysical, and the spiritual,” and how “the latter two were evicted from matter, from the physical, relegating all such things to the privacy of the individual’s heart and mind” (thus creating “an anthropocentric cosmology”), she makes visible the arbitrary nature of the boundaries created by the rise of Science.

Indeed, although Apffel-Marglin’s discussion of the forces that wrought modern consciousness is layered throughout her text, they can be enumerated as a Decalogue of the Worst Modern Superstitions, beginning with the unfounded metaphysical conceit that I. The Human Self is Separate from the Cosmos. With four hundred years’ hindsight, it is now evident that, with the Scientific Revolution, “The very act of knowing became an estrangement, a distancing, and a controlling of matter. Knowledge became power, naked, unrestrained by sentiment, moral strictures, or by aesthetic guide-posts.”

After Descartes’ astonishing epistemological sleight of hand, the descent down the slippery slope into a fragmented world view is inevitable. Soon, it emerges that II. Humans and Nature Are Separate, III. The Cosmos is Mechanical and Dead, and IV. The Identity of a Human is Human, and Nothing Else (That is to say, a “Human being cannot also be an animal, a plant, a rock, a spirit, a deity,” a characteristic of permeable consciousness that allows indigenous cultures to effectively “intra-act” with the cosmos through ritual.)
Building upon this decisive break with what Apffel-Marglin calls the “non-human and other-than-human communities,” the superstructure of consciously formulated scientific belief can be erected, with its conceits that V. Science Can Objectively Represent Reality, VI. Reality Consists of Primary and Secondary Qualities, and VII. Humans Are the Self Conscious Shapers and Guarantors of Their Reality.

Is it too much to say that, upon these tenets of faith, has emerged our modernist, progressive credo, that, VIII. Time Is a Universal Arrow, Moving at a Measurable Pace, IX. Human Cultures Develop from Primitive to Advanced, and most threatening for the health of the “ethnosphere” of the planet, X. Modern Cultures Must Join the March of Progress?

Yet, despite her strong critique of the Modern Constitution, Apffel-Marglin does not throw the baby out with the bathwater. She writes as one thoroughly steeped in the investigative methods of Western science and scholarship. It is therefore fitting that one of the most interesting sections of Subversive Spiritualities is the book’s exploration of the confluence of the epistemology and ontology of Western science and indigenous rituals of reciprocity with a living cosmos. In her discussion of Neil Bohr’s complementary principle, Apffel-Marglin reveals how, once the Modern Constitution is teased apart, a vision of “intra-action” with the cosmos emerges, one which gives insight into and strong support for the reality-creating capacity of traditional, indigenous ritual.

Subversive Spiritualities is, in short, must reading. While authoritative as an anthropological work, it transcends its genre to directly address what are, in the end, the most urgent spiritual issues of our time. It is to be hoped that not only will this text be integrated into the curriculum of anthropology departments, but that it will inspire more engagement among anthropologists themselves. Certainly, the recent publication of Apffel-Marglin’s new book, Selva Vida: De la destruccion de la Amazonia al paradigma de la regeneration, co-edited with Stefano Varese and Roger Rumrill, has caused a welcome stir in her adopted homeland of Peru.

This review is forthcoming in the journal Anthropology of Consciousness, issue 25(2), Fall 2014.