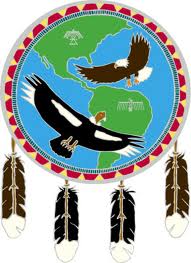 The prophecy of the Eagle and Condor is remarkable in that it marks the first truly international indigenous prophecy widely embraced by both Native and European-descended peoples, yet in approaching it, we need to be wary of the word “prophecy.” Anthropologist Adine Gavazzi reminds us that prophecy in the West involves a diachronic historical process, which among the peoples of the Andes and Amazon does not exist. Rather, there is the experience of cyclical and synchronic time, where different levels of perception of reality occur simultaneously. In other words, people do not witness prophecies unfolding in the linear progression of historical time. They live and experience the reality of myth – and in post-colonial America, such revitalization of the mythic core is a potent means of cultural and political resistance.

According to anthropologist Jeff Jenkins, the prophecy of the Eagle and Condor is within several (Andean Quechua, New Mexican Hopi, Guatemalan, Honduran and Mexican Mayan, Ecuadorian Shuar, and other) traditional indigenous cultures of North, Central, and South America. From these different regions come prophecies with a common theme of arriving to a point in time when “the human family would face the choice of evolutionary transformation into symbiotic presence within the more-than-human world or to continue in the destruction of the planet.”1

The genesis of the prophecy is shrouded. Naturally, throughout South America the indigenous Harpy Eagle and Condor figured prominently in the cosmo-visions of Pre-Contact native communities, yet there is no clear lineage of transmission for the version now in circulation.

“What I glimpse into their understanding is that, early in their history as a people, the ways of the Condor and the ways of the Eagle were shown to them. Initially, this understanding was irrespective of north/south dichotomies. Through the generations of emergence, powerful personal spiritual and physical encounters clarified who the Condor was and who the Eagle was, as with any major plant, animal, mineral ally. I understand that the Condor archetype was symbiotic with the jungle Harpy Eagle archetype prior to European conquest. They soared together in both jungle and mountain terrain through the lands. The concepts of north and south and their respective archetypal and geographical resonance became clearer through subsequent centuries, when the.symbol of the bald eagle became the dominating force of USA orchestrated mass genocide of the indigenous peoples. The indigenous condor consciousness was seen as inferior. The regenerative efficiencies (harvesting carrion and bringing back the energies of the dead) of the condor’s ways were disregarded. Symbolically and literally, the condor began its journey through torturous endangerment to the brink of extinction. The associations of north and south were, if I understand correctly, emergent and co-arising with the expanded intricacies of the way history panned out in the north and south.”2

One version of the prophecy comes from Lauro Hinostroza, a Peruvian healer who now lives in Mexico City., It states that in the historical cycles of the Incan peoples at the end of the eighth Pachakuti (each Pachakuti corresponds to five hundred years), the Eagle peoples would dominate the Condor peoples for one Pachakuti. This coincided with the arrival of Europeans, with their extractive economy and industries, leading to the exploitation, depopulation, and even genocidal eradication of the indigenous peoples of the Americas. The reign of the Eagle peoples was foretold to nearly bring into extinction the Condor peoples.

The prophecy continues with the claim that the tenth Pachakuti, from the end of the twentieth century, would be a time for the peoples of the Condor and the Eagle to fly and mate together in a creative symbiosis to restore and regenerate the Earth community.3

One marker of this opening of the tenth Pachakuti is the emerging unification of indigenous peoples and traditions, North and South, as well as the “indigenizing” of Westerners previously without a native consciousness of connection to the Earth and its larger, non-human community.

There are no historical documents, however, to buttress the claims of an Incan origin of this prophecy, and one hankers for a lineage. In reviewing our earliest record of Incan folklore and mythological cycles, the Huarochirí manuscript, commissioned by the Jesuit priest Francisco de Ávila in the late 1500’s as part of his campaign to eradicate the power of the pre-Conquest priesthood and worship of the huacas among the indigenous Andean peoples, there is no trace of Hinostroza’s pachakuti scheme nor the particular eagle/condor symbolism of the prophecy.

Yet the absence of written documents does not preclude a direct lineage out of the time depths of indigenous America. Since the inter-cultural nature of the myth supports it being a confluence of many different indigenous prophetic streams — especially if a cross-fertilization with the Hopi and other prophetic traditions of the North, which do have a “turning point,” occurred – it is probably futile to seek an original trace among surviving documents. It is through surviving culture that we need to gaze into the backward abyss of time.

One strong candidate for the cultural origin of the prophecy is the Taki Onkoy movement, which flourished in the latter 16th century and was widely mistaken until recent years to have been simply a short-lived political and cultural uprising against Spanish domination, until the work of Peruvian scholar Luis Millones disclosed the spiritual depths of the Taki Onkoy, including its enduring nature.

Spanish chronicles report an ecstatic dance, conducted at the huacas: sites (or loci, since humans, plants, animals and other beings could also be huacas) in the sacred topography of the Andean people where the divine nature of the cosmos was especially manifest and accessible. There the participants underwent a process of purification, sloughing off the imposed foreign traditions cutting them off from their ancestral memory and vital connection to the indigenous cosmos, while reestablishing their communion with the huacas.

The dance of the huacas, (so akin to the tragically short-lived Ghost Dance of the Northern plains), we now know has continued through the centuries, in disguised forms such as among the Danzantes de Tijeras, until the present. For example, in Arguedas 1962 account of the “Rasu Ñiti,” or death dance among the Danzantes, we see the ancestral spirit of the mountain, Wamani, appear in the form of a condor to the agonizing dancer. In this way, dancer can die in peace, because in the trance of the dance the continuity between the past of the ancestors and the future of his surviving family and pupils is guaranteed by the presence of the condor.

Among the Ashaninca of the high rainforest, whose ancient culture displays the ability to integrate the knowledge of newcomers (as they did upon receiving many of the Incan refugees into their communities), the practice of Taki Onkoy particularly flourished. Yet it was not a mere Incan import into their culture. It rather appears both as a form of shamanistic revival that erased religious superstructures, Christian and Incan, as well as a millenaristic practice, intended to reestablish the original balance with the natural world, the spiritual ancestors and the sacred landscape thru the awakening of the huacas. The messianic rebellion of the Ashaninca, led by José Santos Athahualpa in the 18th century which attempted to reestablish indigenous rule in Peru, appears to have drawn much of its spiritual inspiration from the Taki Onkoy.

In the end, it is clear that the Taki Onkoy is not just a historical episode. As Lawrence Sullivan writes, “The myths and rites of the Taqui Ongo religious-dance uprising…defy, escape or recreate their own initial historical setting in the sixteenth-century Peruvian Andes. Not only by their periodic reappearance in Andean History but also by their reappearance in ethnographies and in our own imaginations, these images transcend their original situation. Their presence among us in the twentieth century makes them and their meanings part of our own historical situation in a way that must be reckoned with”4

This way of ceremonial re-membering, with its messianic promise of the resurgence of native consciousness, enduring for centuries under the baleful, coercive glare of the European invaders and their predecessors, is not simply a heroic expression of a profound cosmology capable of encompassing a foreign belief system. It reminds us that the prophecy of the Eagle and Condor did not materialize out of thin air – it is a gift to us of hundreds of years of native resistance and tenacious remembering.
It is, in short, a brief lyric from a profound song of homecoming: nostos.

1. Jenkins, An Ecozoic NeoNative Wisdom: Interfacing Cosmological Indigenous Ritual And The Story of the Universe, 10-11.

3. Jenkins, An Ecozoic NeoNative Wisdom: Interfacing Cosmological Indigenous Ritual And The Story of the Universe, 10-11.